Each day beyond this will be a new “longest time”, but yesterday was a tie with the previous record. In late December 2016, when my sweet woman got a holiday break from her first year of chemo, her sister from another mother, Kathrin, stole her away to Germany for 22 days.

That separation was an outlier in our time together. The previous longest time we had suffered apart had been 5 days, and it was only once in our nearly two decades together. It wasn’t unusual for her to take a day or two to be with the kids when they were away for college, or setting up in a new city, for going to see a play for which the oldest daughter had been scene designer, or an impromptu photo excursion with the youngest daughter.

But that 5 day trip had been the first time we had spent nearly a week apart and when she returned we held each other for more than an hour as she came through the door and she whispered to me with tears running down her face onto my shoulder “I never want to be away from you that long again.”

Chemo seemed to change that. Trapped in a seemingly endless cycle of Radiation, chemo, more radiation, and more chemo for seven months had made her feel claustrophobic, anxious, and wanting to cling to something that didn’t daily remind her of the path she was on. Kathrin rescued her with a plane ticket, offering one to me as well but reassuring me that Diane would be spoiled and cared for with love if I stayed home to work on the first draft of Splinter Self.

That trip had been meant to last 12 days. Diane and I both hesitated to accept Kathrin’s generosity since we both knew how hard 5 days apart had been. But the temptation of treatment-free, worry-free pampering after seven months of bone aching, muscle cramping, gut destroying chemo and radiation proved too great and I kissed my sweet girl goodbye as she tearfully clung to me at the security checkpoint.

While in Germany Diane met and made friends with a number of Kathrin’s friends, including one who had spent months preparing for a performance. The date of the performance was 8 days after Diane was due to come home. Such a kindred spirit was this new friend that Kathrin was easily able to convince Diane to stay another 9 days to see it and catch a later flight. It was a decision she soon came to question and second guess, leaving her aching with greater intensitiy each additional day that passed. It nearly spoiled the whole trip for her.

And that’s the story of how we ended up staying apart for 22 days. Skimming over the tearful video calls, the seven or eight times a day we texted or called on WhatsApp, I recall how anxious I was. My panic attacks began the day the doctor explaine to us why Diane had been sick, but I hadn’t experienced daily, even hourly panic until the 12 days I had braced for passed me by with no Diane returned to my arms. Texts were replaced with calls in every instance, many lasting as long as two hours. She once cried herself to sleep in my ear and I only severed the connection once I heard her softly snoring.

The hardest time I’ve ever pulled — 22 days without my sweet girl.

When she returned to me, I ran into the international arrivals cordon area and scooped her up in my arms. We stood there in the middle of the corridor, crying and clinging to one another, whispering love and relief into each other’s ears as the throng of international travelers streamed around us on both sides, some casting sideways glances and smiles, some with sideways glances and perturbed frowns.

We remained like that for many long moments, then again in short term parking for nearly an hour. Once home we spent that evening wrapped in each other’s arms and into the next day, leaving bed only for meals until late afternoon.

Those 22 days were hell for two who had come to love more than our own lives.

Yesterday, as I had nearly four years ago, I was antsy, anxious, busying myself with chores, meals, and anything else I could manage to make the time go by faster until the return of my girl. Today I woke still waiting and, as I have for the past 22 days, I woke with tears, saying softly into the still dark morning, “Good morning, sweet baby. I love you.” 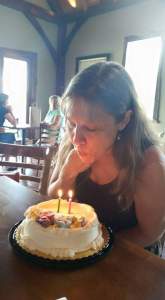 I know it’s an impossibility but I still wait for that call, or that alarm to go off so I can drive to Dulles International, park in short term, and wait at the international arrivals to sweep her up into my arms again. I expect any moment for the front door to open and hear her calling impatiently and longingly “Carebear, I’m home.” To cling to each other for long, unending ages standing in the still-open doorway, breathing in each other and whispering soft relief into one another’s ears.

Today is a new mile marker for me, and unlike the one that hurt so badly, this one will not resolve with long embraces, whispers of shared relief, and aching anticipation for repayment of missed intimacy. Today is the first day I have no earthly comparison for the wanting I feel… the longing, the hopelessness, the grief. This new mile marker will be replaced tomorrow with a new one and yet another the day after. And so my life will become one of counting new mile markers, of putting one foot in front of the other, still hoping but never being satisfied by the reunion I so need… not until it is my time to go.

I do feel her here; in everything she made, in every room she painted, in every hat, scarf, and sock she knitted, in every napkin she wove, and in every vessel she formed from clay. Beyond that, I feel her comfort me when I sometimes forget to breathe — that sudden gasp as if I had been submerged in dark water and break surface… I feel her behind me, arms around my shoulder and chest. In the dark half-sleep, in our bedroom, in our bed, I sometimes hear her whisper sweetly, “good night, carebear. Sweet dreams.”

Good night, sweet baby. Thank you for being my girl.